The New Neuroscience of Stuttering. 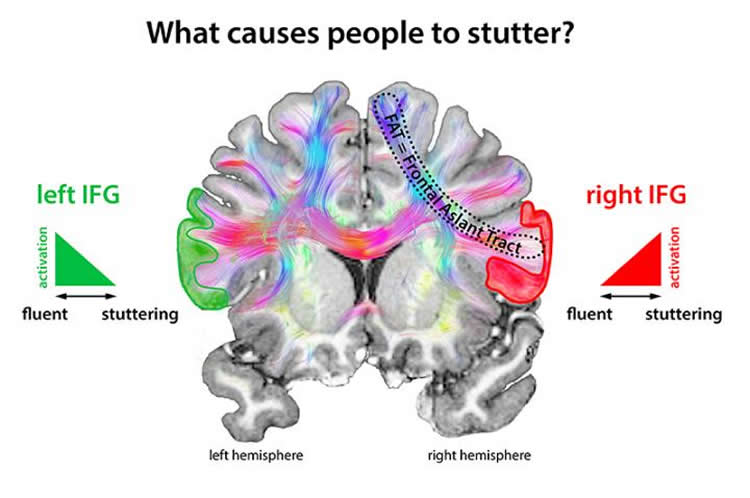 Gerald Maguire has stuttered since childhood, but you might not guess it from talking to him. For the past 25 years, Maguire — a psychiatrist at the University of California, Riverside — has been treating his disorder with antipsychotic medications not officially approved for the condition. Only with careful attention might you discern his occasional stumble on multisyllabic words like “statistically” and “pharmaceutical.”

Maguire has plenty of company: More than 70 million people worldwide, including about 3 million Americans, stutter — that is, they have difficulty with the starting and timing of speech, resulting in halting and repetition. That number includes approximately 5 percent of children, many of whom outgrow the condition, and 1 percent of adults. Their numbers include presidential candidate Joe Biden, deep-voiced actor James Earl Jones and actress Emily Blunt. Though those people and many others, including Maguire, have achieved career success, stuttering can contribute to social anxiety and draw ridicule or discrimination by others.

Maguire has been treating people who stutter, and researching potential treatments, for decades. He receives daily emails from people who want to try medications, join his trials, or even donate their brains to his university when they die. He’s now embarking on a clinical trial of a new medication, called ecopipam, that streamlined speech and improved quality of life in a small pilot study in 2019.

Many famous people have a stutter or did so as a child, including (left to right) presidential candidate Joe Biden, actor James Earl Jones and actor Emily Blunt.

Others, meanwhile, are delving into the root causes of stuttering, which also may point to novel treatments. In past decades, therapists mistakenly attributed stuttering to defects of the tongue and voice box, to anxiety, trauma or even poor parenting — and some still do. Yet others have long suspected that neurological problems might underlie stuttering, says J. Scott Yaruss, a speech-language pathologist at Michigan State University in East Lansing. The first data to back up that hunch came in 1991, Yaruss says, when researchers reported altered blood flow in the brains of people who stuttered. Over the past two decades, continuing research has made it more apparent that stuttering is all in the brain.

“We are in the middle of an absolute explosion of knowledge being developed about stuttering,” Yaruss says.

There’s still a lot to figure out, though. Neuroscientists have observed subtle differences in the brains of people who stutter, but they can’t be certain if those differences are the cause or a result of the stutter. Geneticists are identifying variations in certain genes that predispose a person to stutter, but the genes themselves are puzzling: Only recently have their links to brain anatomy become apparent.

Maguire, meanwhile, is pursuing treatments based on dopamine, a chemical messenger in the brain that helps to regulate emotions and movement (precise muscle movements, of course, are needed for intelligible speech). Scientists are just beginning to braid these disparate threads together, even as they forge ahead with early testing for treatments based on their discoveries.